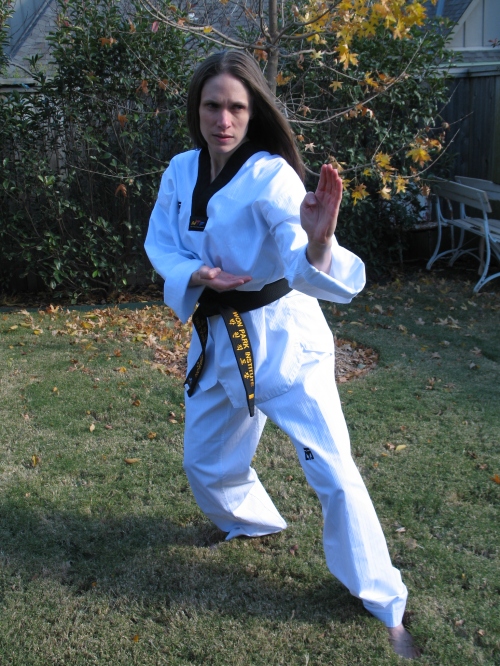 When did you start with taekwondo and for how long have you been practicing?
I started practicing taekwondo around 1989 at age ten. I trained for two years then quit in 1991 right before I started junior high school. In 2013 at the age of thirty-three I decided to get back into it after having it in the back of my mind for years. I started over as a white belt and am now a second degree black belt.

How come you started with taekwondo?
For some reason that I can’t remember now I told my parents I wanted to learn karate. I wasn’t very athletic other than being a good swimmer, and I definitely wasn’t into team sports. I was a quiet, shy kid who preferred reading and drawing to social activities. Maybe I was drawn in by the mystique of martial arts. I think I had a fight inside me waiting to get out. My parents took me up on it and signed us all up for lessons at our local taekwondo school. I grew up in a small west Texas town of about 11,000 people, and taekwondo just happened to be the only martial art in the area. Had I lived in a larger city with more choices maybe I would have done something else.

The second time I got into taekwondo as an adult  I was seeking something positive at a time when I was really struggling emotionally. I looked good on paper with degrees and a career, but I was unhappy and didn’t have the best coping skills. Finally I just snapped and thought, “Enough of this crap. I’m tired of making myself miserable. It’s time to do something fun. Why not get back into taekwondo?” As fate would have it, my west Texas childhood instructors’ Korean grandmaster operated a taekwondo school in the city where I live now. How could I not do it? Taekwondo had always been in my life. I just had to find it again.

What do you like the most about taekwondo?
Just wait until my memoir is published; it’s all in there! 🙂

It’s hard to pinpoint what I like the most. What I appreciate the most is how it helped me grow mentally and emotionally. It happened so fast that I had to start writing it down, which is how my blog Little Black Belt got its start. Re-learning and practicing taekwondo opened my eyes to how I was choosing to live my life. It made me more confident, self-aware, and accountable. It gave me something fun and uplifting to focus on in the midst of what we all call “adulting”: going to work, maintaining a household, paying bills, etc. Of course I love the actual art itself and the techniques I’ve learned and continue to practice as a black belt, but I’m more grateful for the “taekwondo spirit” I’ve gained than the physical stuff.

Are there many women practicing taekwondo?
Taekwondo is an incredibly popular martial art, so you see both a lot of males and females. Probably more men in the higher ranks and governing bodies, but that is slowly evening out. I now train with a female master. She is an inspiring leader and an amazing taekwondo coach.

What are some of the reactions you have faced as a taekwondo practitioner – positive and negative?
I’ll start with the negative so I can end on a good note: I’m tired of the dumb jokes every black belt has probably heard, like “Oh, I’d better not make you mad!” or “Wow, you’re a black belt? Do you think you could kick my ass?”

Fortunately, I’ver never been in a situation where I needed to kick someone’s ass other than a time when I thought I was going to get attacked by a rather aggressive dog. Ha!

These days taekwondo has a mixed reputation. Taekwondo has also become pretty controversial and much-disputed practice in the martial arts world what with the differing opinions over Olympic style sparring, demo teams that seem to do more hip hop dancing than actual technique, and those unfortunate “McDojangs” that are very real, at least in the United States. There’s also the matter of how it doesn’t take very long (relatively, anyway) to get a black belt in taekwondo. Getting a black belt in taekwondo doesn’t take as long as some other martial arts, although I want to make clear that a first degree black belt in taekwondo is not the pinnacle of…well…anything. It means you’re really good at color belt techniques and you get to start all over and work on harder things for many many years. At the right school with the right training and the right testing requirements the taekwondo black belt has merit.

Here’s the positive:
Taekwondo has made me into a much better person to be around. I’m happy, healthy, in good shape, and I’ve found my tribe of people I truly care about and want to spend my time helping. It gave me a sense of community and connected me with awesome people I would have never met. Other people noticed changes in me–a more positive attitude, more confidence, and more willingness to interact with others and lead. I’m not sure how this happened, but kicking the crap out of other people actually made me nicer. Who knew?

It’s been six years since I decided to bring taekwondo back into my life. I’m not sure what state I’d be in now if I hadn’t done that. I’m in the best physical shape of my life, and I look forward to making my life fun and exciting. Maybe I’d been hoping for that secret to happiness when I told my parents at ten years old that I wanted to become a martial artist.

3 thoughts on “Interview with a woman in martial arts – 2: Melanie (taekwondo)”